The GraphQL Foundation was formed in March 2019 and has now completed one full year of operation. We are pleased to present this annual report detailing the many things we have accomplished in support of this fast growing and broadly adopted platform.

Comments and feedback are welcome at info@graphql.org.

"The growth behind the technology and the community supporting GraphQL has been incredible. The GraphQL Foundation has played a critical role in helping to make GraphQL a neutral industry standard and enabling widespread adoption by encouraging contributions, and creating shared tools, and resources."

A BUSY YEAR FOR GRAPHQL#

The GraphQL Foundation is a neutral foundation created by the founders of GraphQL, along with many organizations who are using GraphQL in production. The GraphQL Foundation encourages contributions, stewardship, and a shared investment by providing vendor-neutral events, documentation, tools, and support for GraphQL.

GraphQL is a next­-generation API technology developed internally by Facebook in 2012 before being publicly open sourced in 2015. Unlike REST-­based APIs, which take advantage of HTTP and existing protocols, GraphQL APIs provide developers with the flexibility to query the exact data they need from a diverse set of cloud data sources, with less code, greater performance and security, and a faster development cycle. Not only does this enable developers to rapidly build top­ quality apps, it also helps them achieve consistency and feature parity across multiple platforms such as web, iOS, Android, and embedded and IoT applications.

The GraphQL Foundation also funded community member Ivan Goncharov to work through a variety of GraphQL project issues, from backlog cleanup and more. 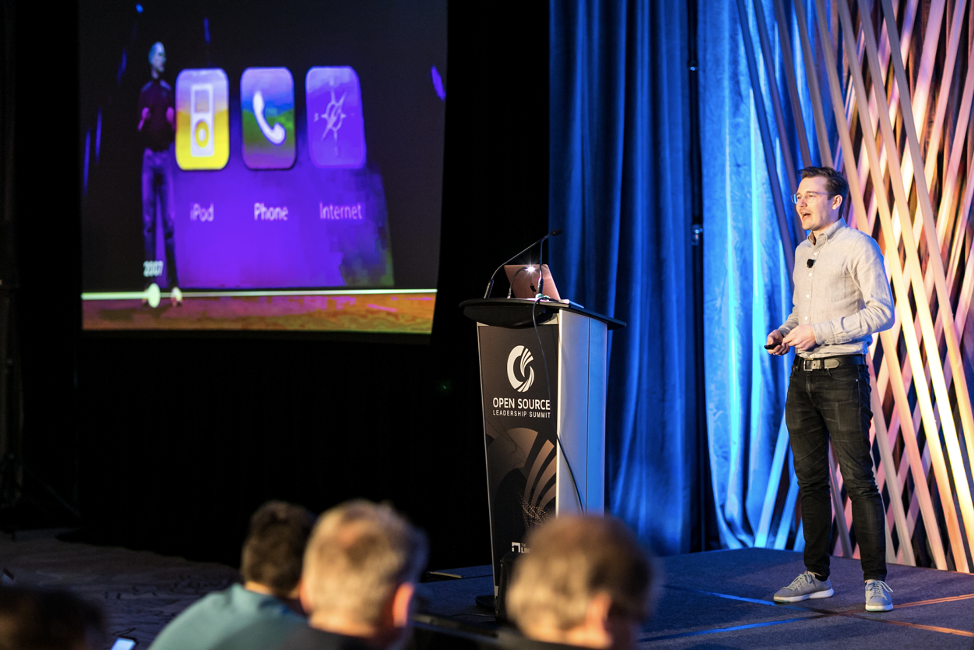 Organizations interested in becoming members of the GraphQL Foundation or the GraphQL Specification can learn more on our new member page. If you have questions about membership, please send an email to membership@graphql.org.

We offer multiple opportunities for end users to contribute and have their voices heard. Companies that use GraphQL technologies internally, but do not sell any GraphQL services externally, are eligible to join the end user community.

Our end user community is growing and we finished 2019 with 83 top companies and startups that are committed to accelerating the adoption of GraphQL and improving the developer experience. Please email us for more information at membership@graphql.org.

HOW DO I GET INVOLVED?#

GraphQL is first and foremost an open source project, and developers can contribute to the project at https://github.com/graphql. Organizations interested in becoming members of the GraphQL Foundation or participating in development of the GraphQL Specification can learn more on our new member page. If you have questions about membership, please send an email to membership@graphql.org.

The GraphQL community is fortunate to have an active and engaged group of companies participating in the GraphQL Foundation.

WHY OUR MEMBERS USE GRAPHQL#

"GraphQL is a transformative technology that saves time and money for every team building rich, user-centric applications. Apollo is proud to play a central role in its rapid rise and maturation in 2019. Apollo’s industry-leading open source and cloud services power many of the world’s most significant online properties, including Expedia, Airbnb, PayPal, The New York Times, SurveyMonkey and thousands more. Apollo also hosts the world’s largest event dedicated to this technology - GraphQL Summit - which in 2019 featured more than 1,200 attendees and over 60 technical talks from some of the world’s most recognizable brands that are already benefiting from GraphQL."

"Collaborating with the Open Source community is always special; it has allowed AWS to improve and better understand the use cases that customers want to tackle, such as local mocking and testing. In order to move fast and ensure that we were releasing a valuable feature, we worked for several months with community members. We want to give a special thanks to Conduit Ventures for their significant contributions to the new Amplify local mocking environment."

"GraphQL has been a huge accelerator for how Expedia Group's web application and service teams build APIs. Being part of the open source community is a priority for us in how we contribute back and learn from others on the same journey."

"GraphQL is a rare technology that simultaneously improves the communication between machines and between humans! Data becomes easier to explore and consume for humans and GraphQL's spec driven design allows the creation of tools that can automate complex tasks around data fetching on the server and data management on the client. Hasura's flagship GraphQL engine automates complex data access work while giving API consumers an API they love using!"

"IBM is pleased to be an active member of the Linux Foundation's GraphQL project by participating on its technical working group and as a founding member of its Governing Board. IBM continued its commitment to innovating on key open technologies such as GraphQL in 2019."

"At Novvum, our team is tiny, but we try to contribute to the foundation and open source community whenever possible. A few projects that come to mind are graphql-playground, graphql-weekly, graphql-birdseye, and the graphql edX course. GraphQL enables teams to focus on their bottom line and less on the nuances of software development. It provides the freedom necessary for frontend devs, UI/UX designers, content marketers, etc. to make incredible stuff without compromising the safety, flexibility, and stability desired by backend teams. It's come a long way since the early days. We are not surprised to see so many big named companies adopting it today."

"GraphQL has been a complete game changer in the way PayPal thinks about data, fetch data and build applications."

"Salsify provides a commerce and content platform that enables the world's largest brands to deliver engaging product experiences across the digital shelf. Our GraphQL powered APIs enable us to support a diverse set of integrated use cases on an extensible microservices platform architecture with great developer ergonomics and excellent performance."

HOW OUR MEMBERS ARE USING GRAPHQL#

Facebook has used GraphQL to power our production mobile apps for the last 7.5 years, from its creation as an internal API in 2012 to its open sourcing in 2015 and beyond. In 2020, we’re as invested in the community and the technology as ever — we’re discussing our approach to streaming semantics with the GraphQL working group, and we’re powering the new Facebook.com with GraphQL and Relay.

Novvum had been deploying graphql into production for the majority of our customers since its inception back in 2015. On any project, we find it extremely beneficial to add GraphQL as the primary communication layer between clients and the data that they need. From building car-sharing platforms on a time crunch to architecting fintech infrastructure to scaffolding MVPs for early-stage startups, we've observed many short- and long-term benefits by introducing GraphQL.

PayPal uses GraphQL to power many of our products and user experiences including PayPal Checkout, our flagship product that facilitates payments for millions of merchants and users.

MEMBER CONTRIBUTIONS TO THE GRAPHQL ECOSYSTEM#

Our members have been active and engaged participants in the GraphQL ecosystem. Here are some of the ways in which our ecosystem has been enriched through their participation.

PUBLICATIONS FROM OUR MEMBERS#

TALKS, PAPERS, AND DISCUSSIONS ON GRAPHQL#

The GraphQL Foundation is proud to offer a new, free course – Exploring GraphQL: A Query Language for APIs – through edX which we have had thousands already sign up for.

If you are a programmer, this course will help you gain the skills you need to get started using GraphQL for a small project, or professionally in production. We cover a variety of tools to address multiple use cases.

If you are nontechnical, this course will help you communicate with developers and participate in conversations about GraphQL, and understand when and why to use GraphQL for a project.

Want to start a meetup? Drop us a line, we’d love to hear your idea: info@graphql.org.

The GraphQL Interactive Landscape was recently published by the GraphQL Foundation. 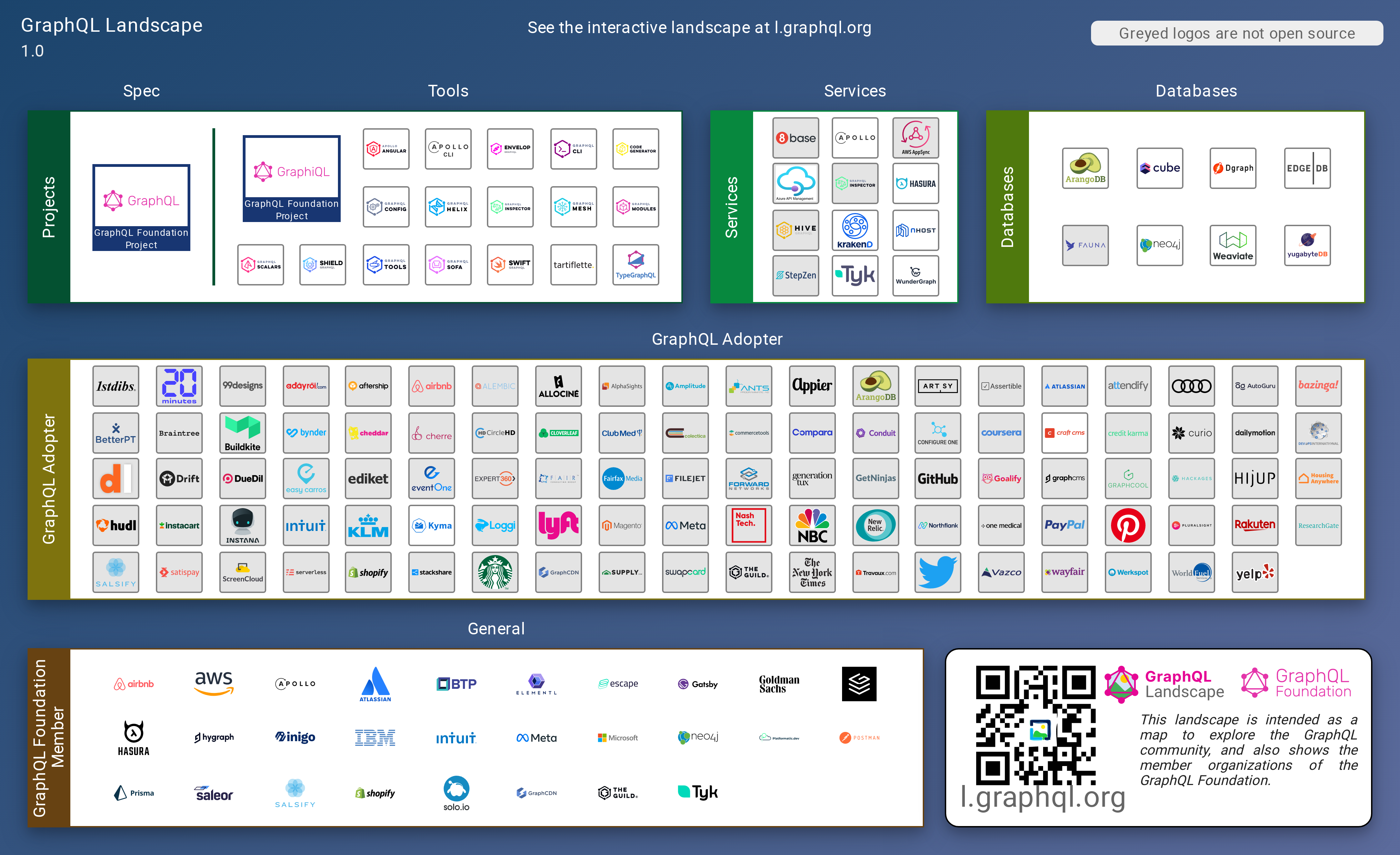 What is an interactive landscape? The concept started when the CNCF began the process of cataloging different types of tools for building out a cloud native architecture. This led to the creation of the CNCF Interactive Landscape. Turns out this tool became very helpful to all of us sorting out this new and exciting space. In the interest of providing a similar reference, the GraphQL Foundation defined their own version of the interactive landscape, including also adopters of GraphQL technology.

The landscape is open source, and contributions from the community are welcomed. You can find guidelines for updating the landscape at: https://github.com/graphql/graphql-landscape.

The DevStats tool, which is open source, downloads data representing every public GitHub action across GraphQL Foundation projects and stores it in a queryable Postgres database. DevStats downloads updated data every hour and you can check out the tool here: https://devstats.graphql.org

As the Executive Director of the GraphQL project, I hope I can speak for the whole community when I say we are looking forward to another productive year of GraphQL development. We are putting the final touches on the GraphQL 2020 spec release, and continue to make great progress developing new features, stabilizing existing ones, and exploring beyond core GraphQL.

It has been really encouraging to see GraphQL continue to evolve over the past year as a technology and as a community. GraphQL is being used at scale by not only Facebook but now a great number of organizations large and small. As I said when first introducing the project, GraphQL is unapologetically driven by the needs of the client. This has been a critical aspect of GraphQL's success and it is great to see this principle reflect itself in our community, where those more interested in consuming APIs than producing them have come together to support the ongoing sustainability of the project.

Since establishing the GraphQL Foundation, we've had an outpouring of support from these companies. This neutral, non-profit home for the GraphQL project has provided a healthy way for users, contributors, and supporters to collaborate and contribute funding in support of our programs and collaborative processes. For example, this support has enabled us to support long-time contributor Ivan Goncharov to focus on crucial development and maintenance of the reference implementation, specification and other community gardening work. It has also allowed us to launch a free GraphQL edX course, and has enabled us to take some first steps toward supporting and producing community events.

Development of the GraphQL spec has remained open to all contributors. Over the last year we've brought more rigor and clarity to the development process. I've found it encouraging that contributions have been a healthy mix of aspirational new features and iterative improvements to the stable base. This demonstrates that GraphQL is evolving in meaningful ways to address exciting new use cases while also building confidence and stability around what thousands of companies use in production every day. Both of these are essential for GraphQL's long term success.

Looking ahead, I have great optimism for GraphQL and see huge opportunities. First, we've been hard at work on the 2020 spec and that release is imminent. Spec development continues to accelerate and exciting advancements and improvements are underway for the 2021 release and beyond. Second, we have been accepted to participate in Google Summer of Code and are looking forward to adding these talented students as project collaborators. Third, the communities around the core GraphQL project are collaborating. For example, GraphiQL and Playground recently announced they will be joining efforts to build better tools for us all.

Thank you again for your involvement in this project and your support of the GraphQL Foundation. I am pleased with our progress and am looking forward to another productive year.